220 Youngsters Gather in Leuven to Attend the PeaceJam Belgium Conference

On 23 and 24 February 2019, over 220 youngsters between 15 and 25 years old from all over Belgium gathered in Leuven for the annual PeaceJam conference. The conference has been jointly organized by the KU Leuven, UCL, ULB and VUB universities and offered an opportunity for youngsters to meet the Nobel Peace Prize winner Tawakkol Karman, a journalist, politician and human rights activist who won the prize in 2011 in recognition of her work for women’s rights in Yemen.

For two full days, during the 2019 conference, students and teachers had the opportunity to meet with a strong and positive role model, and promoted projects and activities aiming to increase equality, justice, sustainability and peace in their own local realities.

By participating in workshops and activities, such as “Rapping for Peace”, “African Dance” and “Walk in Consciousness”, as well as interacting with local and international organizations focused on positive change including Amnesty International, Safe Refuge Rwanda and Serve the City,  youngsters could engage into meaningful initiatives, while having their voices heard. From issues of inclusion and citizenship, to the rights of people with disabilities and equal opportunities, each young PeaceJammer brought his/her personal experience into a vibrant and moving discussion concerning contemporary issues.

PeaceJam is an international organisation aiming to mentor young leaders to change the world. In collaboration with 14 Nobel Peace Prize winners who embody the spirit and the values of the organization, PeaceJam organizes every year a two-days conference during which teachers, pupils and students can inspire each other to take action in their local communities. Throughout workshops, play and jam sessions they discuss topics such as developing leadership, understanding global hassles and setting up initiatives to promote positive change.

The 2019 conference was one of a series of annual conferences that take place in countries currently participating in the PeaceJam Programme. The event is part of the PeaceJam project “Nobel Peace Prize Laureates mentoring Youth to build an Inclusive Europe”, supported by the Erasmus+ programme of the European Union.

PeaceJam Belgium started in 2016 in response to an increasing concern about the raise of discrimination, lack of opportunities and injustice at the European level. With the support of the Erasmus+ programme of the European Union, PeaceJam Belgium and its European partners aim to replicate the success of the PeaceJam experience specifically for the European reality, by strengthening the relevance of the “Compassion in Action” educational curriculum in schools and youth organizations across Europe. PeaceJam Belgium already successfully organized three national conferences in 2016, 2017 and 2019, and aims to reach 25 schools and 500 students all over the country by 2020. 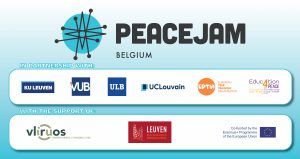