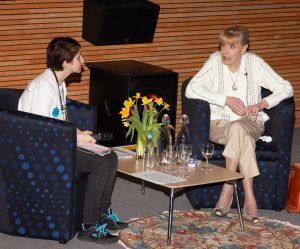 Betty Williams is the co-recipient of the 1976 Nobel Peace Prize, for creating the Peace People movement with Mairead Corrigan Maguire, which called for an end to the sectarian violence in Northern Ireland during The Troubles.

The conference was attended by one hundred young people from Universities, schools and youth groups across the UK; giving them the unique opportunity to learn from the inspirational experiences shared by Betty Williams.

Young people explored how to take nonviolent action to solve problems in their community, with a particular focus on tackling knife crime, climate change and mental health problems; issues which are increasingly impacting the lives of young people.

Students presented their local community projects to an audience, as part of the One Billion Acts of Peace movement – a fundamental element of the educational PeaceJam programme.

This was the fifth PeaceJam UK conference to take place at the University of Winchester, an educational peace programme dedicated to developing young leaders committed to creating positive change in themselves, their communities and in the world, with the involvement of several Nobel Peace Laureates.

One twenty year old male student from Wales commented, “After attending the PeaceJam conference, I realise young people do have a voice and we can make a difference.

I am personally committed to being a leader for change in my community using nonviolent methods.”

Notes to the editor

For any further information, please contact Sara Belhay on 07938 616645 or on unitedkingdom@peacejam.org

PeaceJam is an international education programme for schools and youth groups and is unique as it is the only educational programme working directly with fourteen Nobel Peace Laureates. PeaceJam itself has been nominated for the Nobel Peace Prize nine times. Our aims are to teach and inspire a new generation to be active citizens and agents for change.

Other points of interest